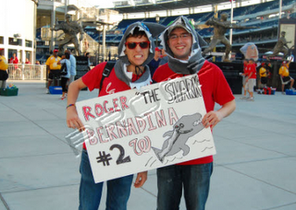 Terry and Tyler on August 26, 2010.
On August 26, 2010 two crazy guys went to a baseball game. On their heads, they wore fleece hoods made to resemble sharks with felt teeth and buttons for eyes originally used in a children's play. They designed a picture in MS paint of a man inside a shark and glued it to a piece of poster board. At the game, they cheered relentlessly for a baseball player named Roger, who hit a game tying home run in the bottom of the ninth. Sharkadina was born.

This is our story.

After we wore our signature fleece Shark hoods for the first time, we took to the internet to spread the word of Bernadina's new nickname. We updated his Wikipedia page, his baseball reference page, and even urban dictionary (warning: some other definitions of "Shark" are not suitable for children). Eventually, he (or his agent?) updated his personal website to include "The Shark" in the header. We still don't know who did it, but it was our first big break.

Our second big break came when the fan blog Nationals Inquisition noticed all of this and wrote about the name. We sent them an email and the follow up post is a pretty funny description of that first game.

" Tyler and Terry, not a couple, but a  couple of diehard Nats fans who seem to have the honor that few fans get to have: actually nicknaming a player and having that player embrace the nickname until the end of time....GOD, I LOVE DEDICATION LIKE THIS! These are my favorite type of Nats fans and the team certainly needs more like them."           -Nats NQ, Feb. 5, 2011 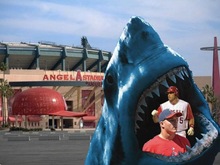 Early Sharkadina photoshop.
Shortly after that, we launched our incredibly successful blog called "Street Shark: Roger Bernadina's Unofficial Blog." It was a horrible title that made absolutely no sense and we soon changed it to Sharkadina, possibly the coolest word invented since the mighty megalodon swam the ocean.

Our blog became known for terrible photoshops of actual sharks eating opposing team's players, Chuck Norris-like Shark Facts ("San Jose named their hockey team the Sharks because Bernadina had a layover there once"), and an obsessively optimistic commentary on Roger Bernadina.
While the we worked on our blogging skills, we continued to go to games wearing the Shark hoods and spreading the word at the stadium. After a game In June 2011, we actually went down near the clubhouse and got to meet The Shark himself!

In person, Roger Bernadina is the nicest person you will ever meet.  He is always smiling and so humble.  He loves the nickname and the blog and was kind enough to give us two autographed game-used bats. - Sharkadina, June 2011

We couldn't believe how lucky we were and how popular the Shark nickname was getting. Our biggest break came at the of June 2011 when Washington Post blogger and all around great guy Dan Steinberg heard about us and interviewed us for the Post. The article was not only published on his blog, but made it into the sports section of the July 1, 2011 print edition, leading to a whole new wave of Shark fans.

His article, How Roger Bernadina became The Shark  is a totally honest, behind the scenes look into the creation of the nickname.

“We had the costumes, but it’s really because the way he hunts down fly balls looks like a shark hunting his prey,” Tyler told me this week. “He was the logical candidate.”
“Plus, we both love sharks,” Terry added.
“Everybody loves sharks,” Tyler agreed. 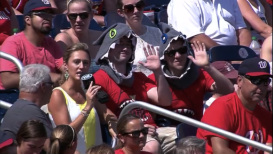 As the season progressed, we found ourselves featured more on the jumbotron and TV, being interviewed or having the blog mentioned by various media outlets, and more people doing the "Shark Chomp" when Bernadina was at bat or made an impressive play. We made business cards and t-shirts, we passed 1,000 followers on our Twitter account, and more Shark hats started popping up in the stands.

Things continued to look up as we hosted the first (and only) Sharkadina Night at the The Big Board DC. Dozens of Shark fans packed the upstairs bar and basically willed The Shark to hit his first home run of the season with a rousing "Shark, Shark, Shark" chant. We almost brought down a chandelier in the resulting celebration.

I love the nickname. I met those guys a couple years ago, I still see them. I follow the blog. They definitely have some interesting stuff up there. Everywhere I go I hear "The Shark! The Shark!" and it always puts a smile on my face.
- Roger "The Shark" Bernadina, August 14, 2012

Needless to say, hearing him say that put a big smile on our faces! We knew he liked the nickname, but it was really exciting to hear him talk about it on the radio and to hear how much fun he and his teammates were having with it. We've said it before, but he really is the nicest guy in baseball.

The Shark's popularity continued to grow, especially during Shark Week that month. Discovery Channel tweeted about Bernadina and the DC based restaurant California Tortilla even ran a Shark themed contest that we lost for a second year in a row. 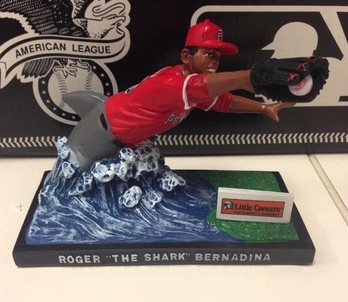 Thank you Little Caesars!
In early 2013, we received word that the Washington National's Single A affiliate, the Potomac Nationals would be giving away a special item that year. They were calling it a "Roger Bernadina Shark-a-rine" It is basically what it sounds like, a half-man, half-shark figurine.

We did not suggest this giveaway, the Potomac Nationals created it on their own based solely on the popularity of the nickname.  This quickly made the rounds on twitter, with many Nats declaring that they must have the one-of-a-kind "Shark-a-rine."

This giveaway was so unique it was even picked up by national media and featured in The Washington Post. and USA Today with the cleverly titled article: Half of Roger Bernadina to be commemorated in giveaway.

Two Nats fans gave him the nickname in 2010, then made up some hats and t-shirts and built a whole website about it. And why not? It's a strong nickname, far more clever than the standard shortened-name convention now unfortunately favored by fans and media everywhere –"R-Bern" or whatever. - USA TODAY, February 7, 2013

We reached out to the Potomac Nationals and they offered for us both to throw out the first pitch at the game and even included us in the shark pun filled press releases about the giveaway they published before and after the game.

Paying credence to the original Washington Nationals fan duo that are responsible for the inception of Roger Bernadina's nickname, the "Sharkadina" crew of Terry and Tyler will be throwing out ceremonial first pitches at The Pfitz on the night of the Shark-A-rine giveaway. - Potomac Nationals, August 2013 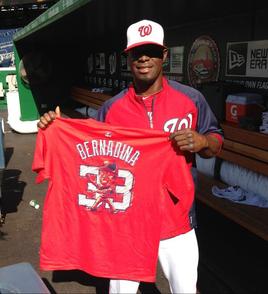 Licensed MLB Apparel!
According to their release, over 6,000 fans showed up to the game that night and started lining up over three hours early just for a chance at one of the 1,000 Shark-a-rines.

Maybe it was their Single A affiliate finally recognizing the nickname, or maybe it was because it was Shark Week, but the Washington Nationals organization finally chose to officially acknowledge the nickname (in something other than a tweet) by creating a limited addition Shark T-Shirt shortly after the Shark-a-rine game.

It features a drawing of Bernadina (complete with dorsal fin!) doing the Shark Chomp in front of his new number 33.

Despite all of the attention he was getting, The Shark was seeing less and less playing time with the Washington Nationals and was really struggling at the plate. His days with the team were numbered.

On August 19, 2013 the Washington Nationals released Roger Bernadina after trading for another left handed outfielder, David DeJesus (who they traded away a few days later). He was one of the only players left from the Montreal Expos organization before they moved to DC and had played his entire six year career with the same team.

Bleacher Report summed up the move in an article which also featured Sharkadina: "Roger Bernadina's Release  by Washington Nationals Inevitable, but Still Painful."

The affable Bernadina was a fan favorite. He boasted perhaps the oddest nickname in all of baseball, when considering how he became The Shark, and the goofy headgear that fans wore to honor the nickname. - Bleacher Report, August 2013

New uniform.
In a bittersweet move, The Shark was quickly picked up by NL East rival The Philadelphia Phillies. DC had to say goodbye to The Shark. The Washington Post summed up his career with the Nats.

We, along with all Nats fans, had mixed feelings as we were happy that he would have a chance to have a new start and possibly get more playing time, but did it have to be with the Phillies?

The End of an Era

Bernadina became an oddly cultish figure. Fans dubbed him “The Shark” and waved their arms like jaws when he came to bat or made an acrobatic play. He wore the nickname as a badge of honor. - Washington Post, August 2013 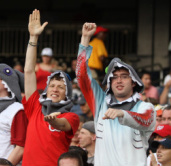 #CHOMP
Three years after we first donned the hoods, it's clear that Roger Bernadina became a fan favorite in Washington. We met a ton of fans who were passionate about their team and embraced The Shark nickname wholeheartedly. We have to thank them, because without them, we would still just be two weird guys who dress up like sharks for a baseball game.

Cheering for The Shark made the games more fun for us, and all Nats fans. We hope that when Bernadina heard the "Shark!" chants and saw the crowd chomping it put a smile on his face and made him play a little harder, run a little faster, dive a little farther. We like to think that it did.
Even though The Shark is playing for the Phillies now, we'll stick by him just like we always have. There's a whole new fan base to explain the nickname to and if The Shark keeps making spectacular catches like he did during his first week there, it won't be that hard. This is just the beginning of a new chapter of his career. Keep following us for updates on The Shark!
Powered by